The gentle hopefulness of terrible disasters

“Avinashi did what she considered her greatest work with the warm weight of her daughter against her back. That series, done while Lily was an infant, was less critically and commercially successful than her first series, ‘Horrible Ways to Die,’ but she herself preferred the gentle hopefulness of ‘Terrible Disasters.’” 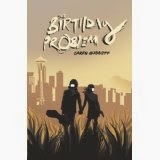 This is one of my favorite passages from The Birthday Problem (Pink Narcissus Press, July 2014), a novel by Caren Gussoff, a Seattle author, a colleague, and a friend (visit Caren's web site to learn more about Caren and her fiction).
Avinashi Gopal was a celebrated artist. Her mother, Malaya, created the nanobots that eradicated human disease. Her daughter Lily opened a bakery. Her granddaughter Chaaya recites Fibonacci numbers when stressed. She is or will have been a mathematician — if not for the nanobot plague.
The Gopal women are a few among many unforgettable characters one meets in The Birthday Problem, the novel that it about… well, very much about this— the gentle hopefulness of terrible disasters, much like Avinashi’s paintings.
I asked Caren a few questions about her novel and herself. Here is what she told me.

JS: You have come into speculative fiction from literary fiction What does spec fic let you do that literary doesn’t, and vice versa?
CG: My first two books, Homecoming and The Wave and Other Stories, were both driven by character and language over plot and idea. Yet I think you can see the seeds of my conversion to spec fic in both books; the settings are hyper-real, the coincidences are near-magical, and, in at least one story from The Wave, features characters of mythical origin.
I’ve always been a sci fi and fantasy fan, and for the first part of my life, was sure I was going to be some sort of scientist. I think of my time in lit fic as my apprenticeship to craft, since it was the genre most embraced in writing programs…and it was easier to get feedback on my work if I wasn’t always having to explain my ray guns and robots.
JS: And I thought you were a literary “plant” in the spec fic world. Turns out you’ve always been a spec fiction plant in the world of the literary!
CG: Yes, ray guns and robots, metaphorically speaking, are my interest, and I love how I can explore really, really divisive and touchy subjects (colonization, gender, race), as well as mushy subjects (memory, identity, redemption) with readers – and eliminate some of the resistance – by setting it on another planet, in alternative history, or played out by non-human beings.
JS: Oh, that’s interesting, about tough subjects. Why do you think this is? Is it like hiding a bitter pill in a cookie? Or is there something else going on, like we always need a mirror of the “other” to see ourselves?
CG: I think it is exactly like hiding a pill in a cookie – it’s very human to resist change and to feel defensive when presented with data that clashes with what we do and how we live. No one likes being shown that they are a racist, for example, by directly pointing out how their specific actions stem from being raised inside an institutionally racist system. Most folks would immediately jump to wanting to defend their actions, as if their very goodness was what was in question.
I’ve found that using an analogy eases this…it lets readers safely draw the parallels between the fictional world and their own world themselves. It’s both gentler and more effective. It sinks in this way, and encourages dialogue.
JS:  If you were to pigeonhole yourself and your works, which one will you end up in? Do you consider yourself a genre-bender?
Read more »
Posted by J.M. Sidorova at 11:18 PM No comments: