Allow me to introduce -- Anna Kashina

She is a mother of two, a cellular biologist, a fantasy novelist, a friend of twenty plus years without whom I would not have read The Lord of the Rings when I did, and not seen Star Wars when I did; a girl, unchanged by time, at whom I marvel to this day because she is a marvelous person —and because she is still a mystery to me.
The credit for starting this friendship goes to a lab course of immunology. Students had to pair up to do the experiments of the course, so she and I formed a team. We performed classical hands-ons, like letting an antigen and an antibody diffuse towards each other through a slab of jelly, and observing formation of arc-shaped zones where the two met and, if they were a match, formed a precipitate. We too proved a good match.
We studied for our finals together and walked our dogs together. We pierced our ears together. We each landed in our first serious relationship at about the same time, and went through the requisite ups and downs. We both were taking swings at writing fiction, first in our native language, Russian, and later, in English. We went to each other’s weddings. More than once. 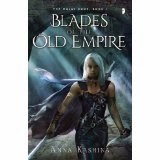 And yet we are so different — ah, let me count the ways. I can’t imagine why she’d prefer instant coffee to espresso. I had picked up martial arts when she’d picked up ballroom dancing (and went on to become a far better dancer than I — a martial artist). Many-many years ago, before Peter Jackson’s movies, we almost had a fight about the physical appearance of hobbits. And did I mention? She writes fantasy. I don’t, I’m pretty sure. But let me tell you: many years from now, we joke, we may just end up moving in together as two old blue-hairs. We’ll probably fight about hobbits, among other things. It would be fun.
Today, in anticipation of the release of the first book of Anna’s new Majat Code trilogy, Blades of the Old Empire (Angry Robot Books, Feb 25, 2014), and as media outlets talk about the book, allow me the liberty to talk about the author.

I am very happy to announce that my novel The Age of Ice has made the  Locus Magazine's 2013 recommended reading list in the First Novels category!
And not only that, it is also included in the ballot. If you read the novel and enjoyed it, please take a moment  to go to the Poll and do some voting.